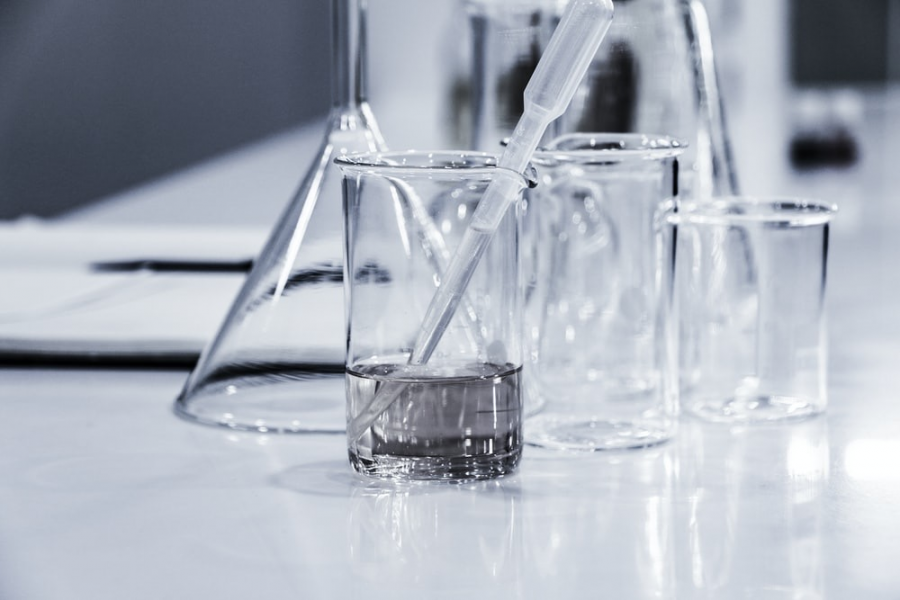 The tools of the science lab: three clear breakers placed on a lab tabletop.

How do you complete a science lab when you have to be 6 feet away from your group, can’t share any materials, and where you might be on a Zoom call? Without the ability to do labs and hands-on activities, GC science teachers have had to get creative fast as usual. To find out what GC Science teachers have been trying, I talked to Mr. Jones, a STEM teacher; Dr. Turcan, a physics teacher; Dr. Chernovitz, a chemistry teacher; and Mr. Cabigas, a biology and zoology teacher.

All the teachers have used virtual, online labs, such as PHET and Pivot Interactives, as alternatives. Mr. Jones’s STEM classes have been using PHET to learn concepts, but not as a replacement for a lab. Using PHET and seeing the virtual simulation helps students understand the concept, but it doesn’t allow them to take measurements or analyze data. However, PHET is not the only virtual option that Mr. Jones has used. One of his STEM classes is currently working on a unit about bridges. In previous years, the students would have built bridges in class. But with the current pandemic, Mr. Jones found an app that students can use on their iPads which allows them to build virtual bridges.

Mr. Cabigas, Dr. Chernovitz, and Dr. Turcan have been using Pivot Interactives. Pivot differs from PHET because it asks students to answer questions, take measurements, and analyze data after watching the lab’s virtual recording. Dr. Turcan believes that Pivot labs are “still not as good as [the students] actually doing the lab, but [are] close.” Mr. Cabigas likes how Pivot allows students to “select several variables which can affect the outcomes.”

Demonstration labs are another way that GC science teachers have been challenging their students this year. The GC Science Department has provided each teacher with a new webcam that can be positioned to show a demonstration so that in-person and virtual students can see it. Dr. Turcan has mixed feelings about demonstrations. He likes that students can take their own measurements but doesn’t like that the students aren’t doing the labs themselves. He described one lab on light diffraction that worked well in his classes. He used lasers and created a setup that the whole class was able to see.

Dr. Chernovitz did a demonstration to help students identify the properties of metals, nonmetals, and metalloids. She collected samples of different elements, such as calcium and zinc. She then tested the samples to look at their electrical conductivity, reaction with HCl acid, and malleability. The students recorded the tests’ results and then concluded whether or not the element was a metal, nonmetal, or metalloid.

Some teachers are also trying out take-home lab kits. Students are each given their own lab kit. During class, each student can participate in the lab, whether at home or in school. One take-home lab that Mr. Jones is excited about involves his STEM classes’ programming unit. Each student will have their own small robot. The students can use an app to program the robot to perform specific tasks.

Dr. Chernovitz recently tried a take-home lab with her honors chemistry classes to help students understand molecular geometry. She assembled kits with toothpicks, gummy bears, Play-Doh, and marshmallows. This was used as an alternative to the model-building kits that GC uses typically. Students used Play-Doh to represent the central atom, the toothpicks to represent bonds, the gummy bears to represent lone pairs, and the marshmallows to represent terminal atoms. This lab worked well with the hybrid model and was completed over 2 class periods. Students could work on the lab when they were on Zoom and bring the kit to school when they were in-person. Although take-home labs don’t allow students to work in groups, they still present hands-on opportunities during the pandemic.

as in previous years. Dr. Chernovitz has not been able to do labs involving chemicals since they “would be hard for students at home to accomplish because we’d have to package liquid samples.” For zoology, Mr. Cabigas “could not bring in actual live or frozen examples of animals, like planaria, mollusks, shrimp, [or] octopus.” But, he has adjusted this lab and has found an online simulation where “students could see [the] flatworm’s reaction to light, … being flipped over, or split into two pieces for regeneration…” Dr. Turcan has a similar way of thinking. While some labs couldn’t be done with current restrictions, he has replaced them with new ones that are safer during the pandemic. He believes, “I can always do something for that topic that’s not the lab [the students] would normally do, but I can do something to replace that.”

Although teachers are looking forward to doing labs as they used to, they agree that the way they teach will be different after the pandemic. Dr. Chernovitz likes Google Classroom and plans to keep using it. Mr. Jones likes being paperless. Dr. Turcan intends to incorporate more Pivot labs and believes that “some of [the Pivot labs] have wonderful setups that we just don’t have.” He also likes using demonstration labs with his classes and plans to incorporate them into his future classes.

Through online labs, demonstrations, and take-home kits, GC’s science teachers have overcome the challenges of social distancing and hybrid and virtual learning. Mr. Jones likes to say “more lab, less gab” to his classes. Even though it seemed almost impossible, GC’s science teachers have accomplished this ideal and have continued to offer the necessary labs for science classes.